Keep on top of jurisdictional closings due to COVID-19

Bang! Crack! Sizzle! Every year, citizens of the United States celebrate their independence on July 4th with backyard barbeques, pool parties, and, of course, fireworks! With July being all about Independence Day, what better month to discuss Independent Managers and why they are necessary for certain companies.

What is an Independent Manager?

An Independent Manager is someone who is separate from the owners and operators of an entity and who has no financial affiliation with the company. This appointed person typically sits in the background until needed. The independent manager must also be a qualified professional who is able to act with intelligence and in the best interest of the company.

Why do I Need an Independent Manager?

When a bank or lender loans large sums of money an independent manager is often required to ensure the lender’s return on the investment. For instance, if a company is forced to file for bankruptcy, the independent manager steps in to vote on the decision, along with the company’s board members, in the hopes of regaining its financial stability.

Benefits of an Independent Manager

When does the appointment Cease?

When the loan is paid back in full, the need for an Independent Manager ceases.

Incorporating Services is ready to handle your Independent Manger representation. Because each appointment is a little different (some lenders require two independent managers/springing members), we ask that you contact us and we can provide you a free quote for the service. The best way to reach a representative is to call 800-346-4646 or email at info@incserv.com and state that you are interested in the service.

Incserv held their second Spirit Week from July 15 through July 19, with the winners crowned on Friday.

There was a strong showing from the Green Team right out of the gate with 10 team members dressing in green for Team Spirit Day! 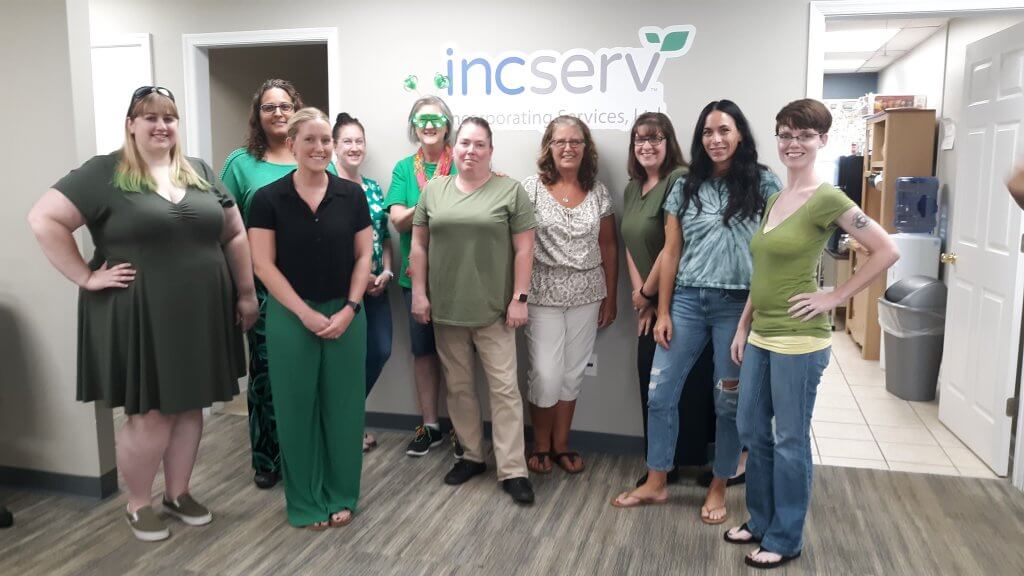 In contrast, the Blue Team used some creativity (including a blue tattoo) to rack up 5 points for their team.

The Green Team took an early lead on the first game of Spirit Week, pulling in 68 points in the first 15 minutes compared to Blue’s 15 points in Capture the Flag (similar to a big seek and find). Both teams were neck and neck with Blue pulling ahead with 30 minutes remaining, but Karen from the Green Team found a flag worth enough points to secure a win for the Green Team! 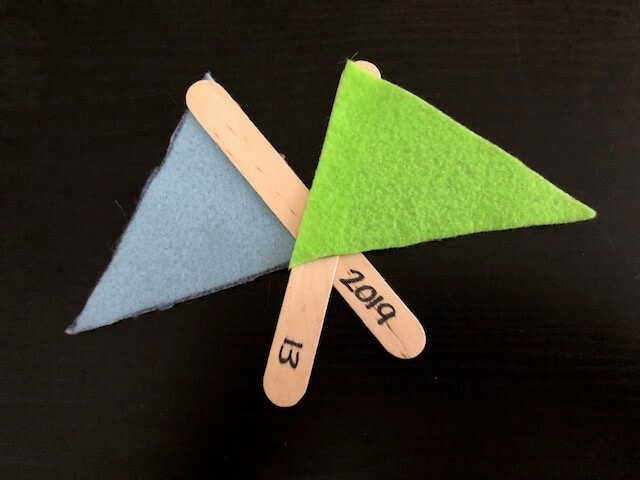 Monday’s final game was Cards Against Humanity. Both teams remained tied until the very end. The Green Team swept the day, winning the game with only 1 point more than the Blue Team! 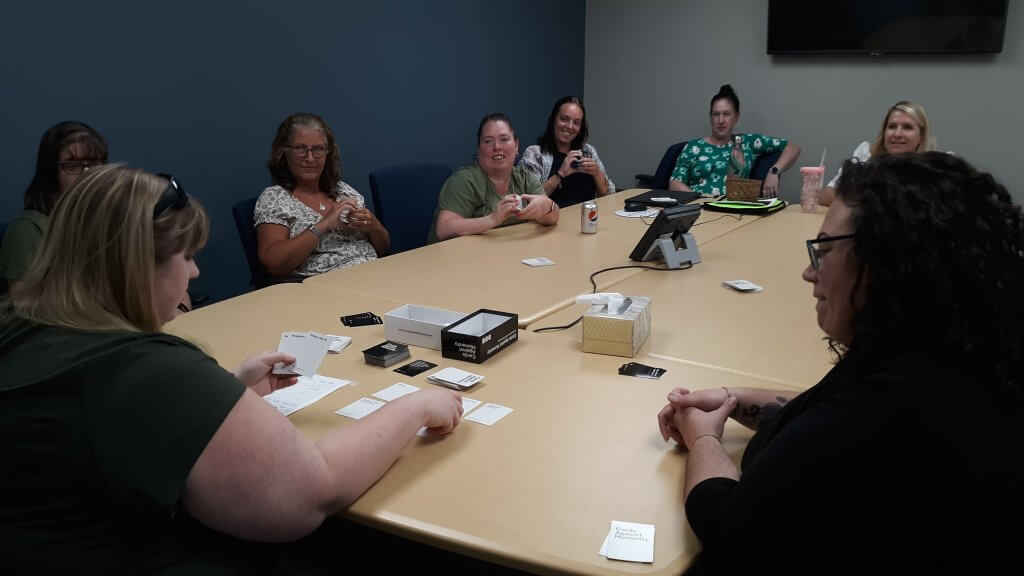 The second day of Spirit Week had everyone in their retro clothes with Blast from the Past Day!

Blue had a small showing with 5 team members showing off their best retro outfits. 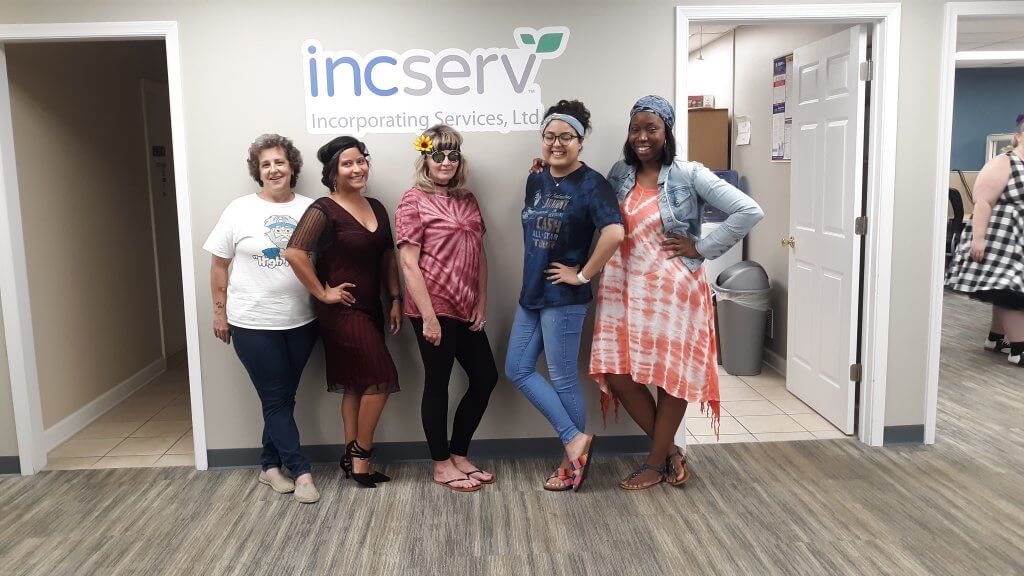 Green dominated this day’s Wear This with most of the team participating. 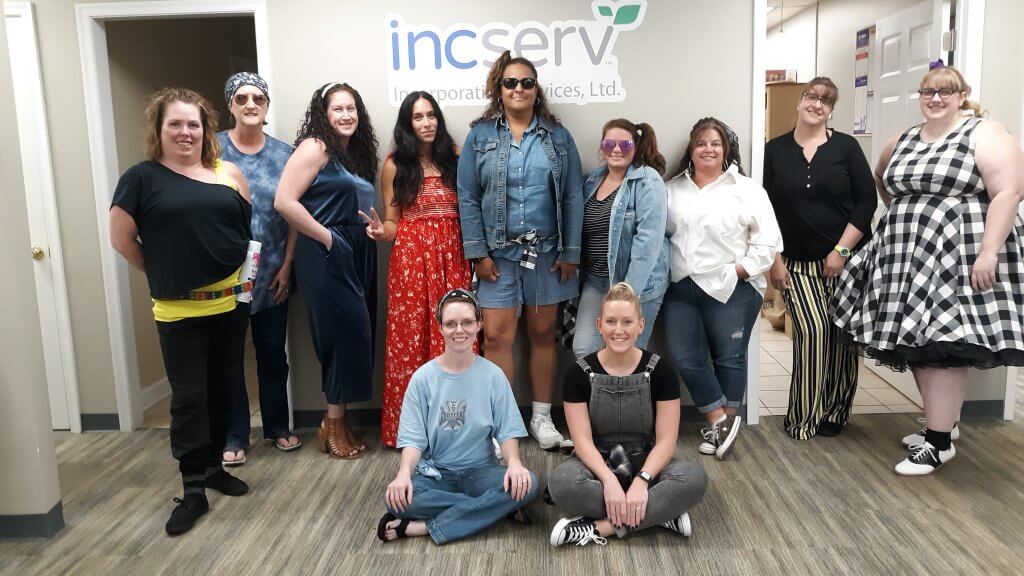 Everyone played Blast from the Past Trivia today with questions from history such as “The Beatles released these two songs as a double A-side single. What were the songs?”, “Popularized during the early 1990s, what game used milk cap discs made of cardboard and slammers?”, and “In what year did Batman first appear on the cover of a comic book?” Collaboration with team members and even family members was permitted, but Google was absolutely forbidden. Camille pulled out a win for the Green Team with a score of 24/25 correct. Straight victories on the first two days of Spirit Week had the Green Team feeling pretty confident about winning the entire thing!

The Incserv team walked into the building Wednesday to be greeted by this: 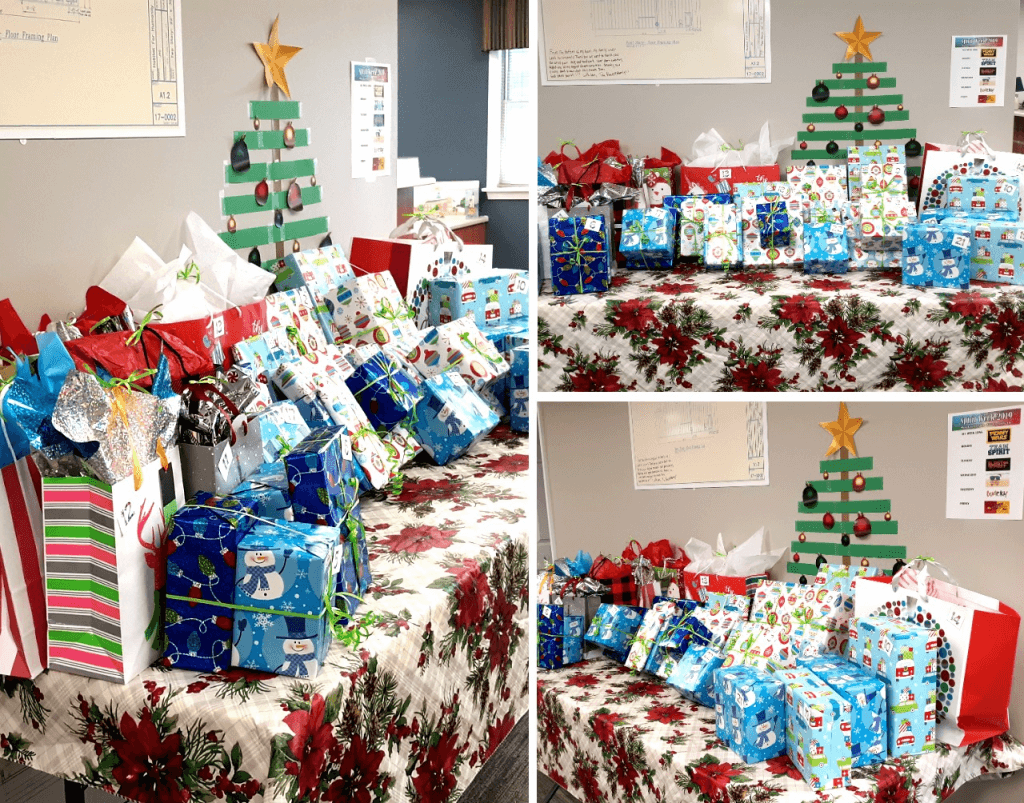 It’s Christmas In July! And staff was left to wonder about this until late shift arrived around 11:30 a.m. When the email went out that everyone was free to grab a number from a bucket and find their corresponding gift, the table was quickly emptied as staff searched for and procured their presents. Some decided to trade their gifts before they opened them at 3pm, and others held onto theirs.

The Wear This! photos were very festive, with the Green Team comfy in their PJs (and their Ugly Christmas T-Shirts)! 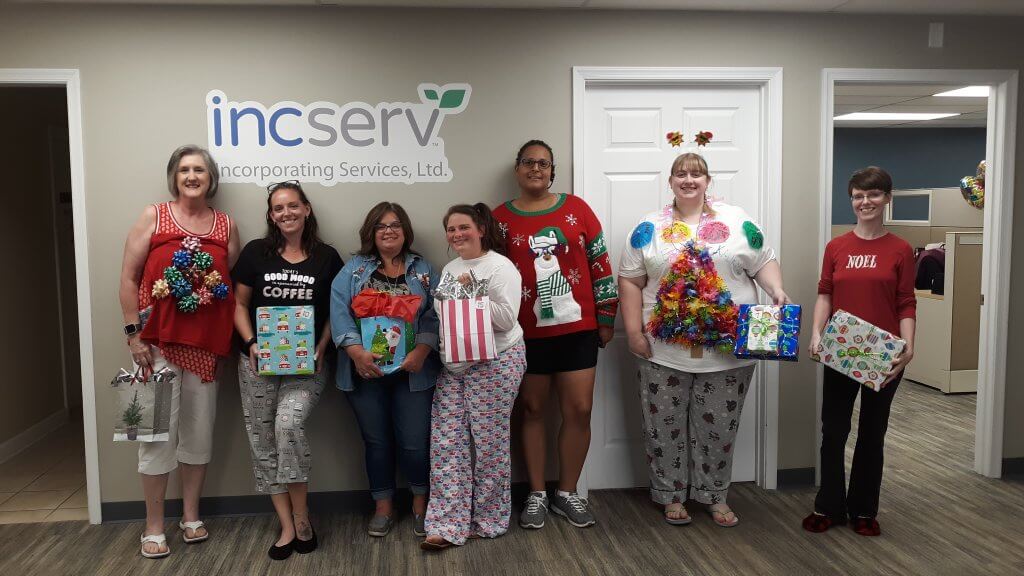 In keeping with tradition, five members of the Blue Team dressed in their PJs and posed with their presents. 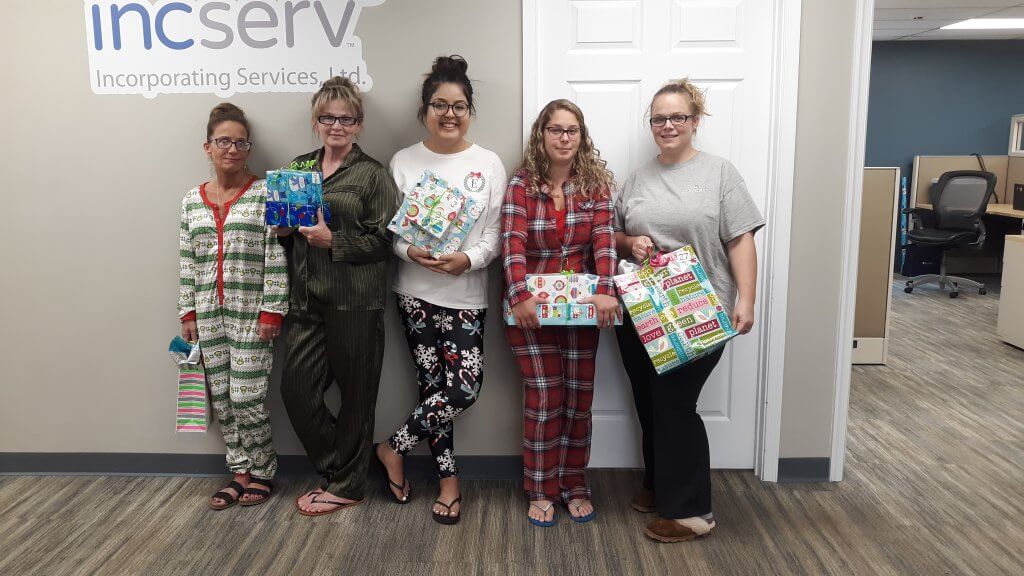 The first game of the day was the Saran Wrap Ball Game where staff tried to unwrap large balls of Saran Wrap as quickly as they could, passing to the next person if they got doubles. Continuing their streak, Green again pulled out a win with Barb getting to the gift card in the center of the ball first.

In the afternoon, staff gathered to fold paper airplanes and let them fly! After an intense 60 seconds of paper folding, 10 staff members threw their planes down the hallway toward Operations. Blue Team member Estrella’s plane went the furthest, leading to a win for the Blue Team!

It appeared most of our staff got dressed in the dark on Thursday – but in reality, it was just the teams celebrating Wacky Day!

Six Blue members had on their oddest outfits. 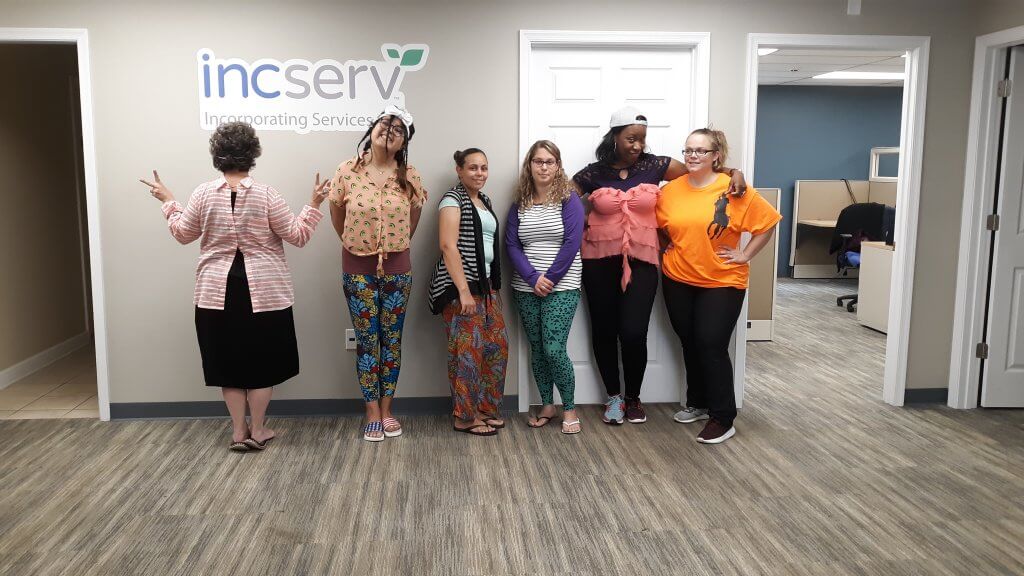 And eight team members from Green showcased their mismatched outfits. 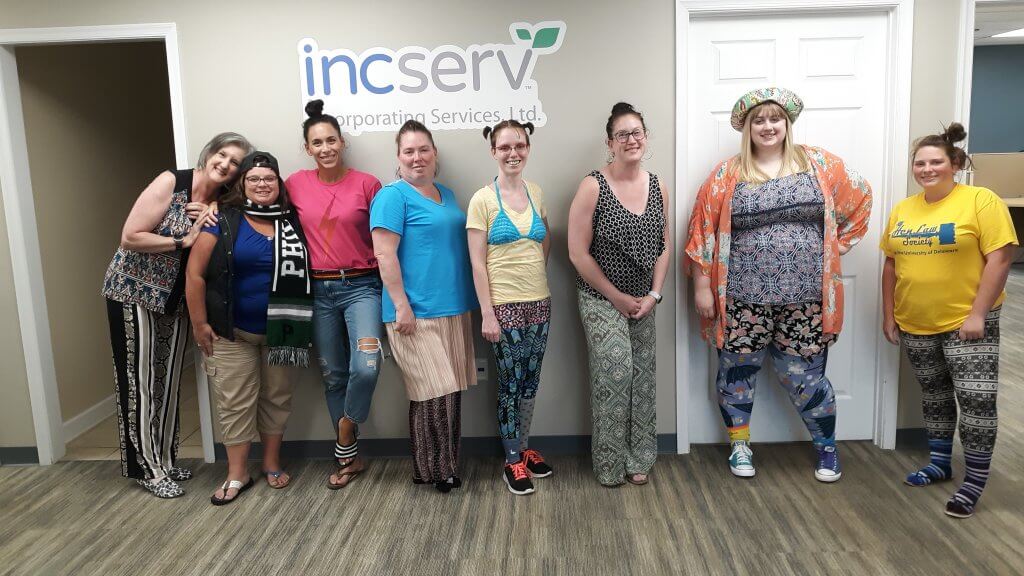 We had five participants per team participate in our first Hula Hoop Relay. Everyone linked hands and had to pass a hula hoop from the first person in line to the last by stepping through it without unlinking hands. The Blue Team proved they were playing to win by finishing this game in 24 seconds, compared to Green’s 27 seconds! 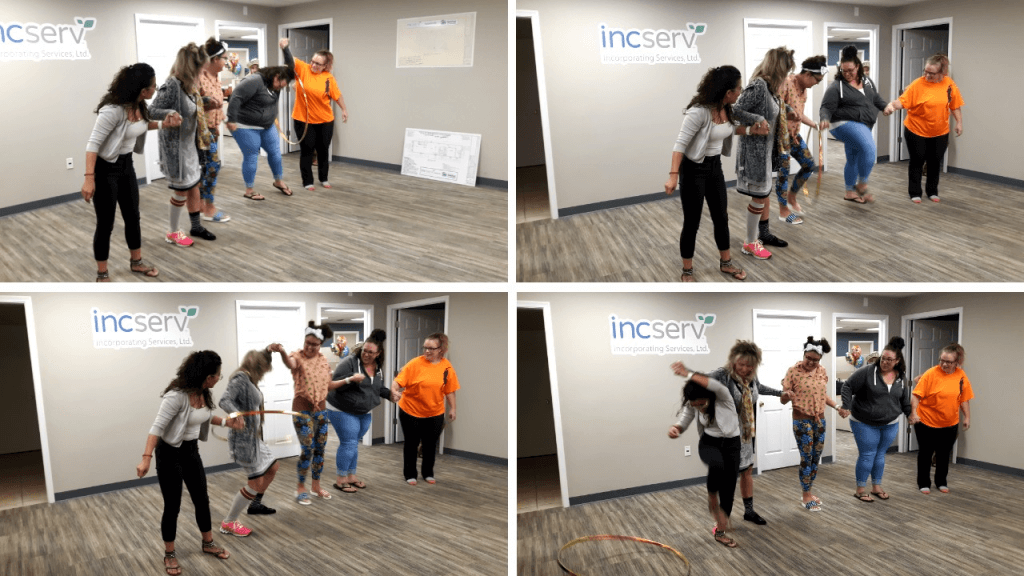 Incserv also held their first ever Art Competition! We have some wildly talented team members who decided to showcase their art which was incredibly diverse, from cross stitch to photography to sculpture to table creation and painting/staining, to piano playing, plus so much more! 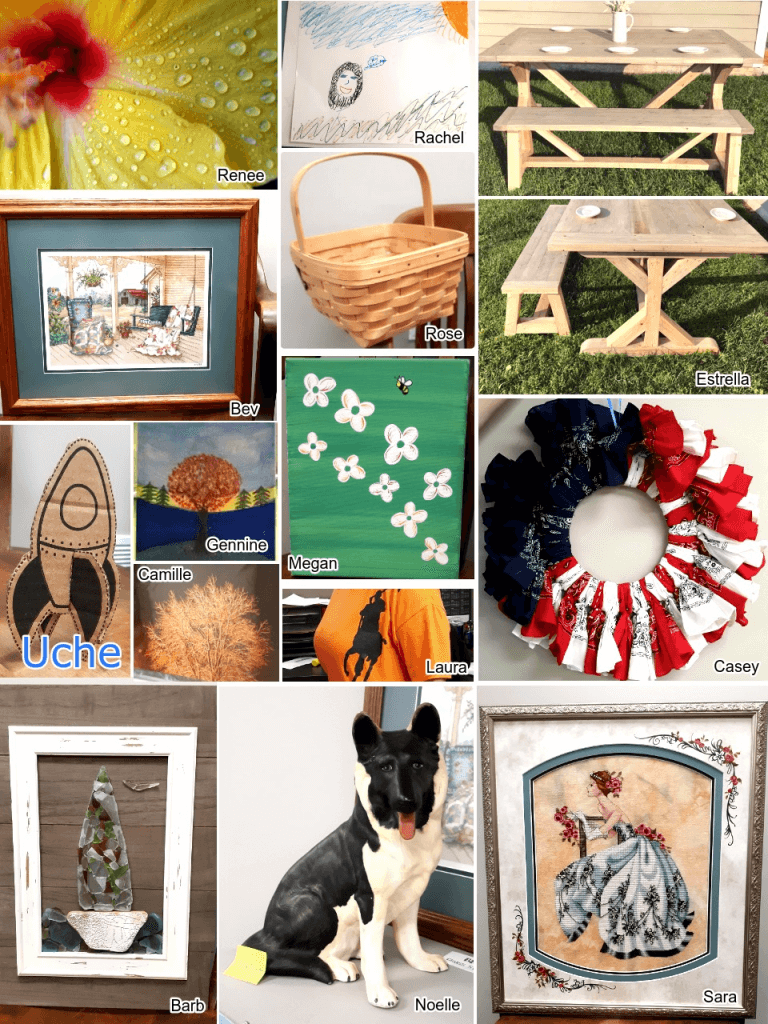 The Blue Team pulled out a win with 14 votes for Uche’s rocket! Sara and Bev from the Green Team came in second and third, respectively, with 6 and 4 votes each.

The Blue vs. Green split was thrown aside for Mistaken Identity Day where almost everyone decided to dress like one of their coworkers, Steffan, in black t-shirts, jeans, and sneakers. Everyone also sported a paper beer Tervis. 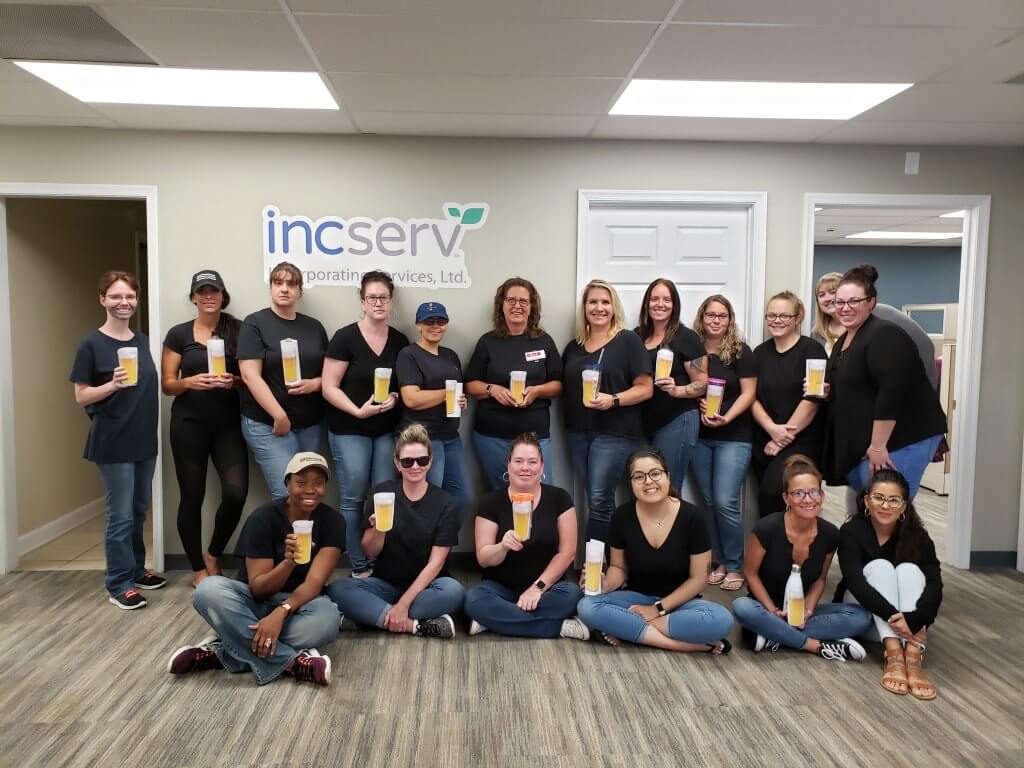 The teams got back into competition mode with 2 Truths and a Lie. Everyone had submitted their truths and lie earlier in the week, and now each player tried to pick the lie from the three choices for each person. The Blue Team continued their streak, pulling out a win with 145 correct answers versus Green’s 99!

The last competition of Spirit Week was a Secret Competition. It turned out to be a quiz all about Incserv! It had us scouring our internal documents and our website for answers to 15 questions. The Blue Team proved they were in it to win it with a total of 87 correct answers to Green’s 67.

The final tallies were in – the Green Team had 131 points and the Blue Team had 130! But all is not lost! We still had Penny Wars to tally – and the team with the most penny-money in the jars wins an additional 20 points!

After some quick configuring, the results were in…

The Green Team pulled it off by a difference of $39.39
and they were crowned the champions of Spirit Week 2019!

Please see the list below for Jurisdictional Closures for August.  Dates and information are subject to change.

Please check out our blog posts throughout the month for any last minute changes or updates from these or any other state or local office.

If you have any questions or need assistance, feel free to contact us at 800-346-4646 or via email at info@incserv.com.

If you’ve ever worked with an Incserv staff member, you know us as hard workers – we’re always taking care of your needs, promptly responding to your calls and emails, and getting filings, retrievals, projects, and other requests done quickly and accurately.  But every now and then, we make time to have some fun, too!  And Spirit Week is our favorite week at Incserv because we get to have tons of fun by combining fierce competition and playing lots of games!

We are stoked to be gearing up for our second annual Spirit Week!  The Employee Action Committee (EAC) puts this and other fun events on each year for Incserv staff, and Spirit Week quickly became a hit last year with its mixture of competition and camaraderie.  The team of 4 has planned different events each day to ensure there’s something for everyone to participate in.  And we’re especially excited to bring Spirit Week outside of our Dover, DE headquarters and involve all of our branch offices – DC, MD, and FL – in the fun!

Spirit Week is a week of competition between two teams – the Green Team and the Blue Team (both colors from our Incserv logo).  This year, everyone drew their team color from a hat (well, a mug), splitting everyone up randomly.  There is a different theme for each day – complete with one or two activities and a “Wear This!” competition.  The EAC has been providing little teasers about Spirit Week until the schedule was finally revealed a few weeks ago.

Tuesday – Blast from the Past

Each team member tries to rack up points for their team by participating in “Wear This!”, signing up for the games, and of course winning the games!  This year, we’re also introducing Penny Wars – the team with the most penny-money in their jar on Friday wins more points for their team.  The team with the most points by Friday is declared the Spirit Week winner and team members win awesome prizes!  The other team gets a little something, too.

Last year, competition was fierce!  There was lots of smack talk, demanded rematches, and even a flip flop casualty.  We expect nothing less this year!

Want to know who won Incserv’s Second Annual Spirit Week (and see Incserv’s team in action)?  Check out our next blog for fun photos and the crowning of the winners!

Annapolis Maryland is not only home to Incserv’s newest Office, and the capital of the State but it also once served as our country’s first capital during peacetime.  The cobble stone streets, paved from the ballast of ships in its port, lead up to the historic Maryland State House, the oldest in continuous legislative use in the United States.  Annapolis’ history and culture is rich and still thriving!

It just makes sense then that Annapolis is also home to the Maryland Secretary of State’s Office.  The Secretary of State is the gateway to your Maryland Certifications and Authentications (Apostille) necessary for documents being presented in a foreign country:

With all that wonderful information, how do you get your documents there and back?  No sweat! Incserv’s new Annapolis Office is uniquely positioned minutes away from the Secretary of State’s Office and can hand deliver your important originals.  With a one day turn around, you’ll stay on target to meet your deadlines and in collaboration with our D.C. Office, we’ll continue the process for you with the U.S. State Department and on to the proper Embassy or Consulate.

For more information on Apostille and Legalization visit our blog!