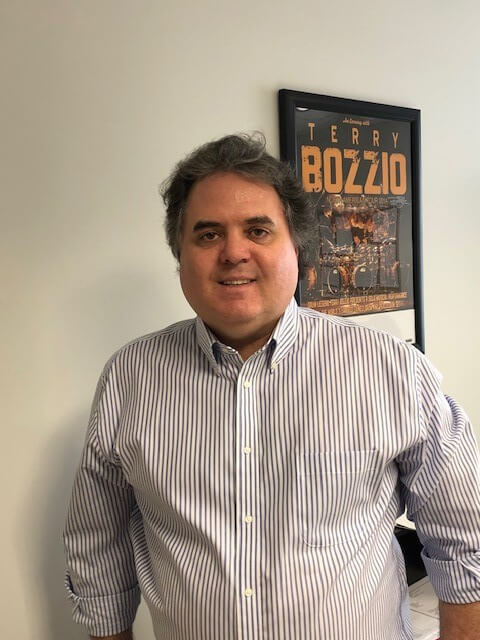 Tell me a little bit about yourself:
(BF) I’ve been in the document retrieval and search business for about 25 years. Prior to being hired at Incorporating Services, I was with another service company for 20 years. During my first years there, I went to DC Corporations and DC Recorder every day for UCC Filings and searches, which we had to do in person at the time. As we hired new employees, they started taking over that job while I took over the county work (which we also did in person). I covered two Maryland counties and five Virginia counties, which I did in a big circle, about every three days. When those jurisdictions came online or we found reasonably priced correspondents, I graduated to working in the office, doing those searches on the computer. Remember, I started that job before the internet as we know it.

On a more personal note, my wife and I knew each other casually in college, became reacquainted online 15 years after graduating, fell in love and got married three years later. I play the drums in an all-Beatle band called the Apple Core, but we don’t wear Beatle suits or wigs. I play and collect American-made drums, and have a basement full of them so I can swap them in and out when the mood strikes me.

What is your educational background?
(BF) I have a Music Degree with a business concentration from James Madison University (Go JMU Dukes!) I began with two years of music concentration, music theory, and ear training. When the other students went on to advanced theory or Music Education classes, I took advertising, marketing, recording studio classes, and even music law. After school, I spent about four years working at a music store that has survived since the sixties. However, I got bit by the law school bug.

I had a friend who ran a service company in DC who hired me, because he knew he could trust me and he could train me. We called them document retrieval companies at the time because there was a lot of running around the city.
After I started there, I did go back to school. I didn’t go to law school, but obtained a Paralegal Certificate from George Washington University in downtown DC. It was a great experience! All of the teachers were lawyers in DC who taught at night. My teachers were trial attorneys, administrative law judges, accountants, and a variety of attorneys who worked at firms, for the federal government, or the District of Columbia.

What do you do in your role as a Client Services Representative?
(BF) I watch the incoming DCorders email mailbox, assign emails to the various DC employees, and do a great deal of the incoming work myself. I organize all of the UCC filings and Corporate filings, which involves looking them over to make sure they look acceptable, enter them into our system, prepare intake sheets, checks, and supervise our couriers. My coworker, Steve Gibson, and I split the DC UCC and Litigation searches. Steve does most of the Service of Process, and assists William Pressey who’s virtually 100% devoted to our very busy Embassy and Legalization side.

Previously, I sent out all of the searches for all over to our various correspondents. Delaware has started sending me work to send to our correspondents around the country and doing what we can online. I still have all my books and notes from my last job, so if you need a correspondent in some obscure county in the middle of nowhere, I might know somebody!

How would your co-workers describe you?
(BF) There are only three of us in DC, and we’re always walking around each other and sharing a printer/scanner. What’s nice is we’re very polite to each other. We say excuse me and thank you two dozen times a day. I hope they would say I’m as considerate and polite to them as they are to me. I do believe they think I’m talkative; I’ll stop in and chat about what’s going on. Actually, I think they would say I won’t stop talking.

What do you like best about your job?
(BF) When I started with the other service company I ran all over the city, then as my job changed I drove all around the beltway going to the various Maryland and Virginia Courthouses, as well as the Federal Courthouses. I liked being out of the office. As all of those jurisdictions came online, I got to stay in the office. I’m happy to stay in the office, but I’m good with running to the DC Recorder and Courthouses when there’s something that needs the personal touch.

Another great thing I enjoy about Incserv is the people. I actually had a “Get to know you” lunch with Stacey Melnick in Human Resources long before I was hired. We got along fine and she very kindly kept me in mind when an opening came up in DC. William is such a friendly and thorough guy who can answer any question, and Steve and I worked together years ago at another service company. He’s so kind and works so hard, I had actually recommended Incserv call him to steal him away from his previous job before I even worked here! Spending eight hours a day dodging two other guys in a small office and having a really pleasant crew goes a long way.

I also like it that my projects last from as little as 15 minutes and a larger project might take three days. I don’t want to work on a project that takes three months. I want to do my work, bill it out, and move on.

What’s the biggest misconception people have about your position?
(BF) Just because somebody else doesn’t see my work, doesn’t mean I’m not working. My clients will send work directly to my email. I do it at my desk- I might not even print out a photocopy other than the initial email. PDF reports and copies are electronic on my computer, as is the invoice. It gets billed out and the only evidence is the check that arrives a month later.

If you could give one piece of advice to your clients, what would it be?
(BF) Chances are you have a book or database you use to look up email address and the name of a correspondent in any given jurisdiction. If you send to them often, make notes of a few things about that jurisdiction, little idiosyncrasies. Cutoff times, special forms, expedite options. Knowing even a little about that jurisdiction can save a lot of email back and forth.

What advice would you give to new employees?
(BF) Make notes in little Word documents you can cut and paste, because you are going to be answering the same questions over and over about fees and turnaround times.

Be nice to your correspondents and your couriers. They will save your butt in an emergency. My correspondents run all over the city and stand in lines for me for $10, so I let them drink my diet cokes and eat my pop tarts. It’s a couple dollars a week well spent.

What is your go-to productivity trick?
(BF) You have to triage your work. Send out the work that takes the longest first, then do the stuff you can do yourself next, and the super quick stuff, such as PACER searches, last. Time it so it all gets wrapped up about the same time. It also helps you get the freshest through dates.

If you could create a mascot for Incorporating Services, what would it be and why?
(BF) That Energizer Bunny that keeps marching and beating that bass drum, because the work keeps coming in and we keep going, and going…. I know I do. Plus, I like bass drums; I have probably half a dozen.

Would you rather be able to speak every language or communicate with animals?
(BF) Every language because diplomacy and communication is very important.

Place you most want to travel?
(BF) Paris. I’ve been to China, Montreal, UK, Holland, Norway and all over the US. My wife speaks French and even occasionally uses it at her job in international development, but she’s never been to France. Paris is the next international trip. We’ll probably piggyback it with a return trip to Liverpool for more Beatle stuff.

What’s the lamest dessert people try to pass off as dessert?
(BF) A very small serving of ice cream.

What is your most life memorable experience?
(BF) My wife sings in one of those big choirs that sings at the Kennedy Center. A few years back, I got to join them on a short tour of China and Hong Kong. I got to see some of the tallest buildings in the world in Shanghai, we walked on the Great Wall, and stood in Tiananmen Square. Pretty cool for a history and politics buff like me.

I also went to Rock and Roll Fantasy Camp and played drums with Joe Perry from Aerosmith, so that’s pretty cool too!